On Monday February 10th at about 2319 hours Waterloo Police were dispatched to 1112 W. 2nd Street on a report of a suspicious incident.  When officers arrived they found Tamica Takeisha Allison (age 42 of 1112 W. 4th in Waterloo) and Andrea Rochelle Anderson (age 41 of 109 Leland in Waterloo) deceased from what appears to be gunshot wounds. An autopsy for the two victims will be scheduled at the State Medical Examiner’s Office in Ankeny.

Based on the investigation Waterloo Police have obtained warrants for two counts of 1st degree Murder for Matthew Dee Buford III (age 36 of 1112 W. 2nd Street in Waterloo).

Buford is still at large and we are asking for the public’s help in locating him (photo attached). Buford should be considered armed and dangerous. He may also possibly be suicidal. 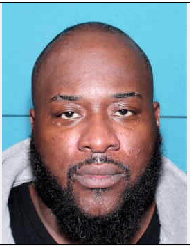 If you have information regarding this investigation or the whereabouts of Buford please call any of the following numbers:

It is important to note that a criminal indictment contains charges that are only allegations against a person. Every defendant is presumed innocent until proven guilty.